Dengue is caused by Dengue virus (DENV), a mosquito-borne flavivirus. DENV is an single stranded RNA positive-strand virus of the family Flaviviridae, genus Flavivirus. This genus includes also the West Nile virus, Tick-borne Encephalitis Virus, Yellow Fever Virus, and several other viruses which may cause encephalitis. DENV causes a wide range of diseases in humans, from a self limited Dengue Fever (DF) to a life-threatening syndrome called Dengue Hemorrhagic Fever (DHF) or Dengue Shock Syndrome (DSS).

There are four antigenically different serotypes of the virus (although there is report of 2013 that a fifth serotype has been found):

Here, a serotype is a group of viruses classified together based on their antigens on the surface of the virus. These four subtypes are different strains of dengue virus that have 60-80% homology between each other. The major difference for humans lies in subtle differences in the surface proteins of the different dengue subtypes. Infection induces long-life protection against the infecting serotype, but it gives only a short time cross protective immunity against the other types. The first infection cause mostly minor disease, but secondary infections has been reported to cause severe diseases (DHF or DSS) in both children and adults. This fenomenon is called Antibody-Dependent Enhancement.

DENV is a 50-nm virus enveloped with a lipid membrane (see figure 1). There are 180 identical copies of the envelope (E) protein attached to the surface of the viral membrane by a short transmembrane segment. The virus has a genome of about 11000 bases that encodes a single large polyprotein that is subsequently cleaved into several structural and non-structural mature peptides. The polyprotein is divided into three structural proteins, C, prM, E; seven nonstructural proteins, NS1, NS2a, NS2b, NS3, NS4a, NS4b, NS5; and short non-coding regions on both the 5' and 3' ends (see figure 2). The structural proteins are the capsid (C) protein, the envelope (E) glycoprotein and the membrane (M) protein, itself derived by furine-mediated cleavage from a prM precursor. The E glycoprotein is responsible for virion attachment to receptor and fusion of the virus envelope with the target cell membrane and bears the virus neutralization epitopes. In addition to the E glycoprotein, only one other viral protein, NS1, has been associated with a role in protective immunity. NS3 is a protease and a helicase, whereas NS5 is the RNA polymerase in charge of viral RNA replication.

The life cycle of dengue involves endocytosis via a cell surface receptor (see video 1 and figure 3). The virus uncoats intracellularly via a specific process. In the infectious form of the virus, the envelope protein lays flat on the surface of the virus, forming a smooth coat with icosahedral symmetry. However, when the virus is carried into the cell and into lysozomes, the acidic environment causes the protein to snap into a different shape, assembling into trimeric spike. Several hydrophobic amino acids at the tip of this spike insert into the lysozomal membrane and cause the virus membrane to fuse with lysozome. This releases the RNA into the cell and infection starts. 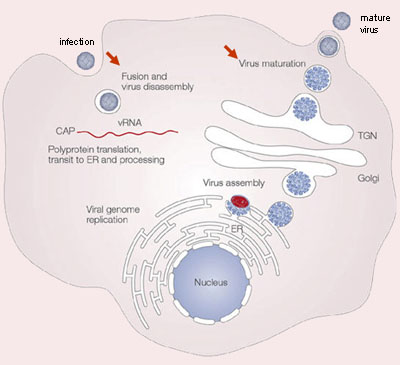 The DENV RNA genome is in the infected cell translated by the host ribosomes. The resulting polyprotein is subsequently cleaved by cellular and viral proteases at specific recognition sites. The viral nonstructural proteins use a negative-sense intermediate to replicate the positive-sense RNA genome, which then associates with capsid protein and is packaged into individual virions. Replication of all positive-stranded RNA viruses occurs in close association with virus-induced intracellular membrane structures. DENV also induces such extensive rearrangements of intracellular membranes, called replication complex (RC). These RCs seem to contain viral proteins, viral RNA and host cell factors. The subsequently formed immature virions are assembled by budding of newly formed nucleocapsids into the lumen of the endoplasmic reticulum (ER), thereby acquiring a lipid bilayer envelope with the structural proteins prM and E. The virions mature during transport through the acidic trans-Golgi network, where the prM proteins stabilize the E proteins to prevent conformational changes. Before release of the virions from the host cell, the maturation process is completed when prM is cleaved into a soluble pr peptide and virion-associated M by the cellular protease furin. Outside the cell, the virus particles encounter a neutral pH, which promotes dissociation of the pr peptides from the virus particles and generates mature, infectious virions. At this point the cycle repeats itself.