The origins of the word dengue are not clear, but one theory is that it is derived from the Swahili phrase "Ka-dinga pepo", meaning "cramp-like seizure caused by an evil spirit". The Swahili word "dinga" may possibly have its origin in the Spanish word "dengue" meaning fastidious or careful, which would describe the gait of a person suffering the bone pain of dengue fever. Alternatively, the use of the Spanish word may derive from the similar-sounding Swahili. Slaves in the West Indies who contracted dengue were said to have the posture and gait of a dandy, and the disease was known as "Dandy Fever".

The first record of a case of probable dengue fever is in a Chinese medical encyclopedia from the Jin Dynasty (265–420 AD) which referred to a “water poison” associated with flying insects. The first recognized Dengue epidemics occurred almost simultaneously in Asia, Africa, and North America in the 1780s, shortly after the identification and naming of the disease in 1779. The first confirmed case report dates from 1789 and is by Benjamin Rush, who coined the term "breakbone fever" because of the symptoms of myalgia and arthralgia.

The viral etiology and the transmission by mosquitoes were only deciphered in the 20th century. The socioeconomic impact of World War II resulted in increased spread globally (see also Dengue epidemiology). Nowadays, about 2.5 billion people, or 40% of the world’s population, live in areas where there is a risk of dengue transmission (see figure 1). Dengue spread to more than 100 countries in Asia, the Pacific, the Americas, Africa, and the Caribbean. 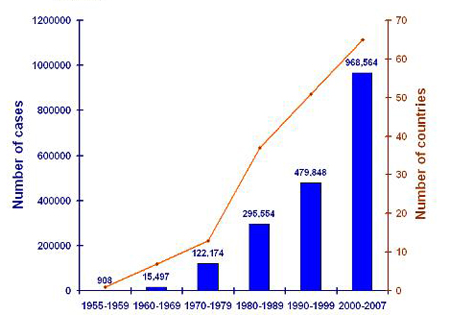